Whats a second, isn’t this…? Didn’t Twitter already announce this?

Today, Twitter has announced that some users on iOS and web will now see its new threaded tweet replies layout, which includes a line linking replies to the original tweet.

Your conversations are the

Some of you on iOS and web will see a new layout for replies with lines and indentations that make it clearer who is talking to whom and to fit more of the convo in one view.

Which is what Twitter also announced back in February.

We’ve given conversations a makeover on iOS. When people you follow are in a conversation, you’ll see their replies in a new way in your Home timeline.

This new layout makes it easier to see who’s replying to who so you can join in on relevant conversations.

In fact, the threaded reply presentation has been in testing, in various forms, since September 2018, so it’s not exactly new, and plenty of people have already seen it. So why the announcement today?

Well, there are a couple of changes.

First, in this new version, when you tap on a reply tweet, you’ll now get a new thread of responses to that specific comment. Reverse engineering expert Jane Manchun Wong provided a look at this functionality early last month.

Twitter is working on selection transition in the Conversation Tree 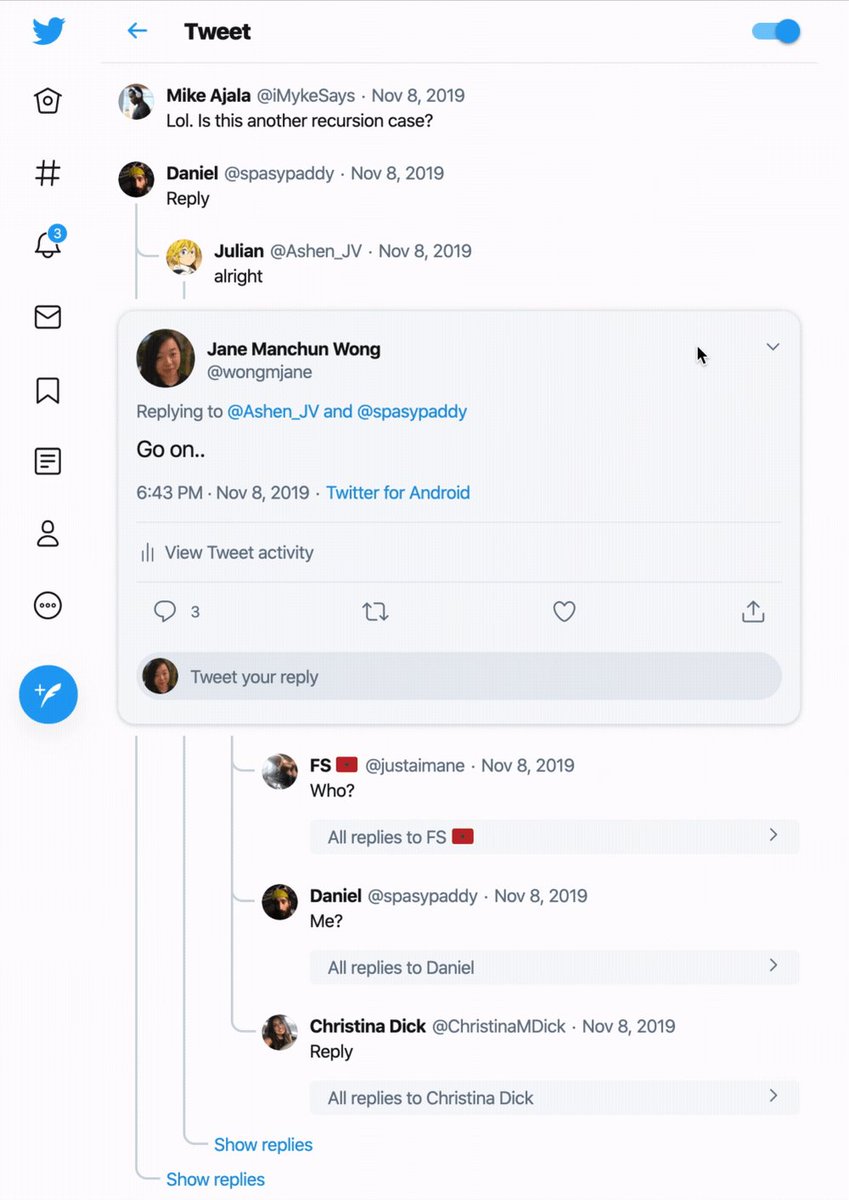 122 people are talking about this

Note that none of these tweets have Like, Retweet or reply icons – Twitter says that it’s experimenting with hiding its engagement tools “behind a tap for replies”. The idea is that by keeping them hidden, it puts more focus on the conversation itself.

These are relatively small tweaks, but for one, they no doubt take a lot more work for Twitter’s engineers, and two, they could have a more significant impact than many would think. Simply not having the Like and retweet options immediately on screen, for example, could reduce people’s instinctive responses, and maybe, make them comment instead, and engage with the original tweet in their own way.

The updates stem from Twitter’s experimental Twttr app, which has been beta testing various options among a selected usage group for the past 15 months. Not many of the features in testing have made it through to the live Twitter environment as yet, so it’s encouraging to see Twitter moving forward with its test of threaded replies – even if it doesn’t seem like a major innovation.

Of course, Twitter’s also working on bigger projects like Fleets, its own take the Stories format, so it’s not like we’re completely starved of tweet innovation. And as noted, these changes, while small, could have an interesting impact.

Ultimately, the data will tell the tale – Twitter says that it’s testing this new reply layout “with a small group on iOS and web to see how it affects following and engaging with a convo”. Hopefully we’ll get more insight on the experiment soon.