Facebook’s making a couple of changes to business Pages, which will impact both presentation and data tracking elements.

First off, as first reported by Marketing Land, Facebook has announced that it’s removing all of its gray verified badges, designed to display Page authenticity, as of October 30th.

Facebook’s gray verification badges – not the blue ones – are available to all Pages which have verified their official details with Facebook by going through an identification process.

Here’s Facebook’s official explanation of the difference between gray and blue badge verification:

Facebook says that it’s decided to get rid of the gray tick based on feedback from users who were unclear on what it actually represented.

Twitter has faced similar confusion with its verification tick, and you can see how, with Facebook having two different versions available, it could be confusing for some people to understand the difference between an official, blue tick verified Page, and a Page that’s gone through the more basic ID process for a gray one.

It’s also possible for Pages to impersonate official company profiles through this method. Because the gray tick process isn’t as stringent, someone could start a duplicate company page, apply for a tick, and present it as the official channel of that business.

Basically, it’s unclear, and it’s lead to some confusion, so Facebook’s seeking to correct it.

Pages with gray badges will soon see notifications like this at the top of their Page display:

As noted in the above warning, Facebook suggests that business Pages that want to prove their authenticity after October 30th should ensure that their Page profile is complete, including up-to-date information, a profile picture, and correct contact information.

In addition to this, Facebook’s also making a change to the way in which it calculates organic Page impressions, which could see a reduction in perceived Page and post reach.

Facebook is changing how it calculates organic impressions meaning it will likely show a decline. 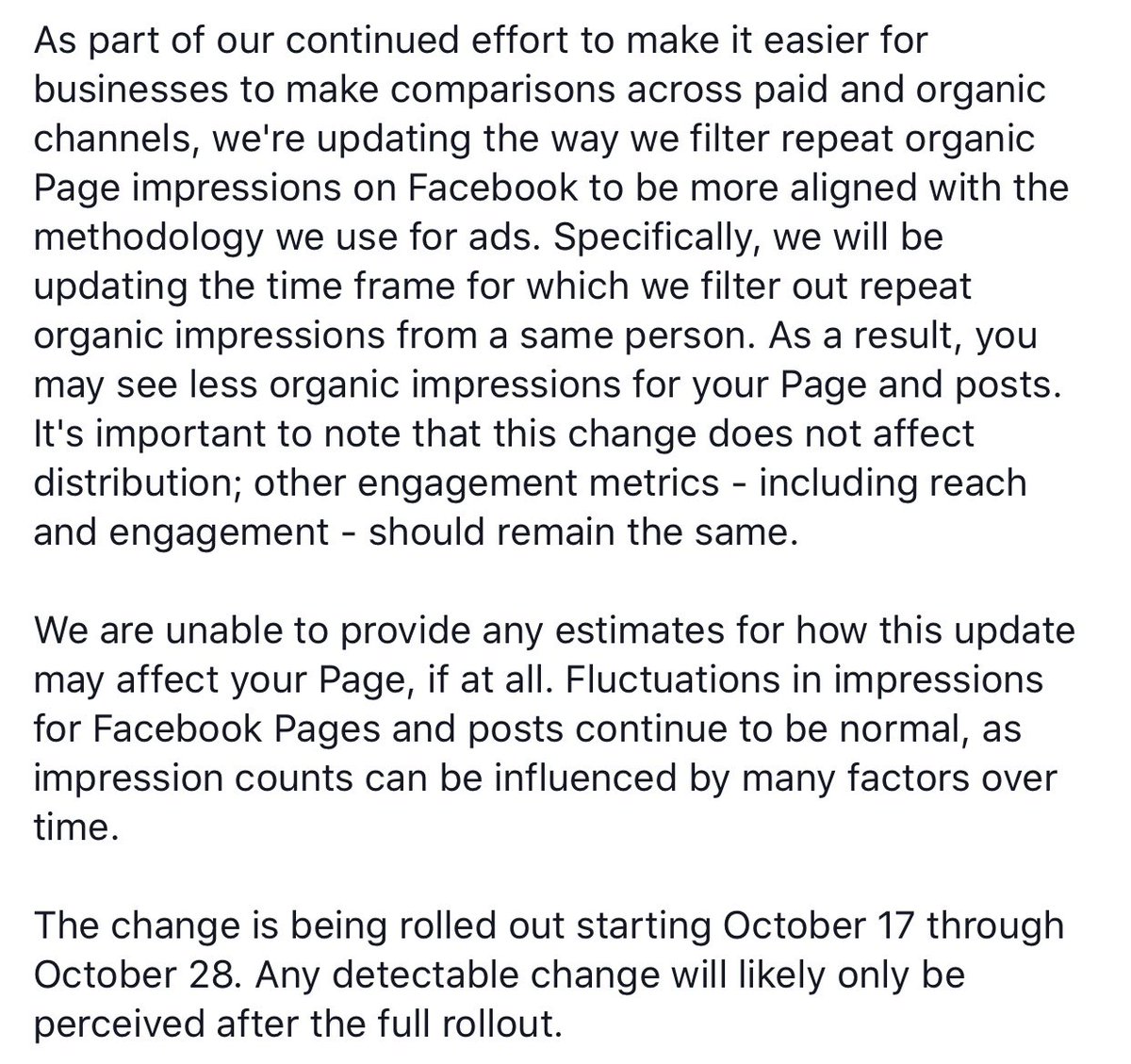 362 people are talking about this

As per the above tweet, Facebook is re-configuring its reach calculations so they’re more in line with how it displays ad reach.

Facebook actually made a similar change in February last year, when it updated its metrics to show how many times a post was available on users’ screens, as opposed to how many times it had been delivered in News Feed.

This change, as noted, is focused on reducing duplicate metrics based on the same person revisiting your Page and/or posts. That means that Facebook’s reach data will be more accurate, or at least, more representative of how many people have actually viewed your content, minus repeat viewers. But it could also mean that your numbers drop.

Worth keeping an eye on your stats to measure the impact.

There’s seems to be sound logic behind both changes, but they will impact how your Facebook Page both looks and performs, based on the data available. How much of an impact each will have is hard to say, but it’s worth tracking your performance to see what happens after October 28th.